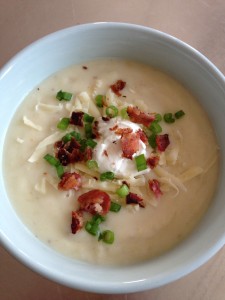 This “Arctic Freeze” makes me want to get into pjs, curl up under a blanket and eat a big bowl of soup. You know, pretty much like last year.  I love loaded baked potato anything, and now’s the perfect time of year for this soup. It was comfort food to the extreme, keeps amazingly well, is thick and rich and totally indulgent.  Plus, bacon. Mmmmmm.

1. Wash the leeks well – these have tons of dirt trapped in them, so it’s easiest to cut them in half length-wise, then submerge them in a bowl of water and flip through them like a deck of cards to release all the sediment. 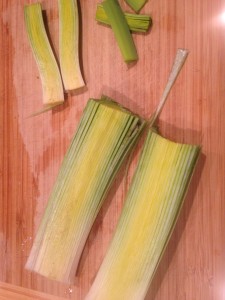 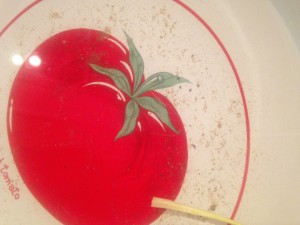 Look at all the dirt that comes out of these guys!!  Would you ever think?

2. In a french oven (these are awesome for cooking everything without burning it), melt the butter and EVOO over medium heat, then add the leeks and cook until they start to get a little color, approx. 5 minutes. 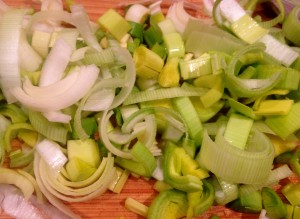 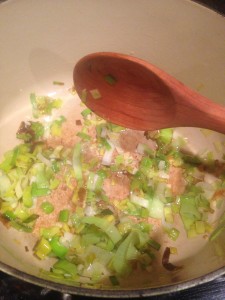 3. Stir in garlic and stir until fragrant, approx. 90 seconds.

4. Add broth, 2 bay leaves and simmer, covered, for about 20 minutes. Side note – I used chicken broth that I made from scratch and kept in the fridge for like, a month, and didn’t know I shouldn’t use it after that long until I looked it up on the internet. However, I’m happy to report that it was delicious and did NOT give me bottulism, although I won’t ever do that again. 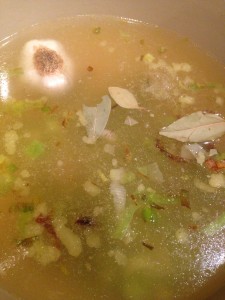 5. Add potato chunks, then simmer, covered, for about 30 minutes or until potatoes are easily pierced with a fork. Remove the bay leaves. 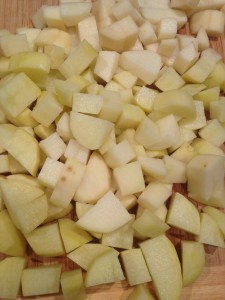 6. Stir in the sour cream, the heavy cream, the salt, pepper and nutmeg. 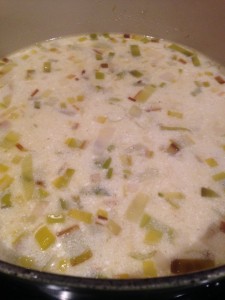 7. Blend with a hand blender until most of the potato chunks are gone and the soup is thick but still kind of textured. Crumble 5 pieces of bacon into the soup, stir in 2 chopped chives (i just used the green parts of these because the white parts get super onion-y). Taste and adjust seasonings. 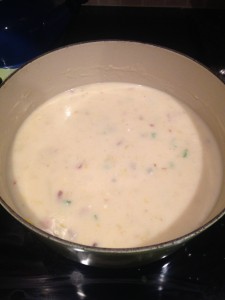 8.  Pour yourself a big bowl, then garnish with shredded cheddar, sour cream, crumbled bacon bits and chopped chives. So good. 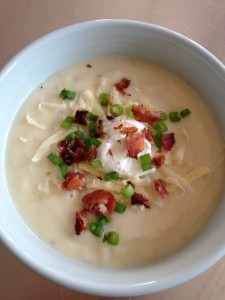